The American Hotel and Lodging Association, (AHLA) the nation’s leading and largest trade association for hotel industry,  has projected a 3.9 million job loss for the industry with current pace of occupancy decline for the year. The economic impact on the hotel industry is already more severe than the 9/11 and 2008 recessions, combined. The impact of the coronavirus pandemic on its 33,000 small business owners who operate 66 percent of hotel properties across the country has been extremely severe with many considering shuttering and closing their doors for good if they haven’t closed already.

AHLA released a report showing the average small business hotel will require additional funding from SBA loans under the Paycheck Protection Program (PPP) in order to rehire employees or prevent further layoffs and keep their business open. AHLA also sent an urgent letter today to Congress asking for additional funding for SBA loan program and several technical updates to the CARES Act to help these hoteliers keep their doors open and save jobs.

“The CARES Act is an historic effort to meet the most serious health and economic challenges of our lifetime, and the hospitality industry recognizes and applauds every elected official who has helped meet these challenges,” stated Chip Rogers, President and CEO of the American Hotel and Lodging Association (AHLA). “The policy solutions and technical corrections we offer do not overshadow the gratitude we have for the work already done to help save our industry. The additional funding and needed changes to the CARES Act are directly related to our only interests: saving jobs of our employees and supporting our small businesses.”

The report shows that “covered costs” as defined in the CARES Act cover only 47 percent of hotel operating costs. With revenues at 20 percent to 40 percent of normal level for the remainder of 2020, the only solution for keeping employees on the payroll is to increase the PPP loan limits.  If the CARES Act is amended to raise the loan limit from 250 percent average payroll to 800 percent of covered costs most hoteliers could keep employees and keep their doors open.

According to Oxford Economics the impact of this virus, and the associated national shutdown, is nine times worse than what the hospitality industry faced following September 11, 2001.

Rogers said the “the hospitality industry is truly engaged in a fight for survival. The human toll is measured in millions of jobs lost, and nearly half of all hotels are functionally closed. If small business hotel owners can’t pay the mortgage or utilities, they will have to close their doors with no jobs for employees to come back to work,” stated Rogers. “We are doing everything we can to ensure those jobs aren’t lost forever.” 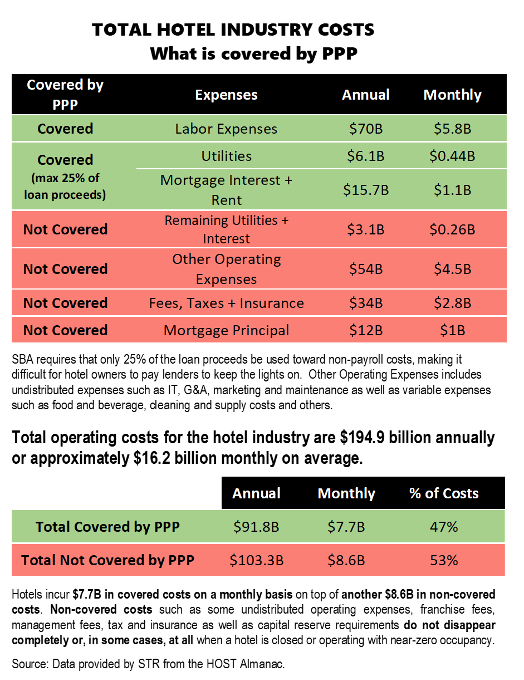 The report also illustrates an average hotel’s pre-crisis cash flow over a normal 6-month period, as well as in the six months post-crisis depending on SBA loan limits.

Even after recover begins, the hotel will not generate significant revenue to cover costs, given that hotel occupancy is not projected to return to pre-crisis levels before 2021 and revenue until 2022.

As this demonstrates, small business hotel operators would be in a worse cash flow position by utilizing the PPP program under the current limits – forcing them to continue layoffs or shut down their property and close their hotel business.

If the SBA loan limit were increased hotel operators would be in a better position to rehire employees and keep them employed.